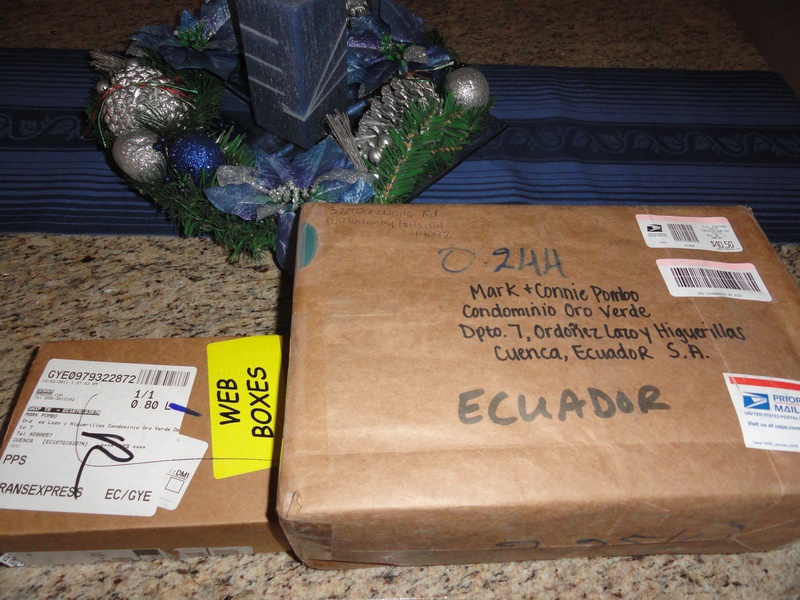 In Ecuador, January 6th is "El dia de los Reyes" (The Day of Kings), which commemorates the arrival of the Magi to confirm Jesus as the son of God. It's also a time of gift giving!

Today, we celebrated "epiphany" with TWO boxes arriving from the U.S., and one of those was from our kids in Cleveland with gifts more precious than gold!

When you live in a foreign country and celebrate Christmas without family, you learn to put your emotions on hold and say, "It's okay, we'll get through this!" But in reality, you're saying, "No, I want to be with my kids on Christmas Day!"

Last year, we flew home for the holidays and this year we stayed in Cuenca (our first Christmas in Ecuador). I'll be honest with you; it wasn't easy and I won't even pretend that it was (keep that in mind all of you wannabe "Expatorians."

Mark and I received a note from our security guard explaining that the "Three Wise Men" had left a gift at the post office. So this morning after we had breakfast at the Coffee Tree with some new folks in town, we headed to the post office.

And what to our wondering eyes should appear...a huge box from Cleveland, Ohio weighing well over ten pounds and costing $40 to send to Ecuador (sending packages to the land of enchantment isn't cheap!).

Mark strapped the package on his back, just like Santa Claus, and we took the #3 bus back home. All the while, I was trying to figure out a way to open it with my bare hands. Good thing I didn't try because it was sealed tighter than Fort Knox with duct tape surrounding it (even customs didn't try!).

When we got back to our apartment, the security guard handed us another package (Mark's web cam that he ordered through Club Correos).

We were thinking that we almost had the Three Kings beat! We just needed one more gift. Instead, as we ripped through the red and green tissue paper, we found TEN gifts (or more!). I stopped counting after a while because I was too overcome with tears.

In the midst of all my emotion, I realized I was still just a mom who missed her kids (terribly!). I hugged my Christmas stocking and let Mocha sniff at his treats before I snatched Mark's slippers and claimed them as my own!

While I dabbed away tears and ate Ferrero Rocher bon-bons, I re-read Jon and Kim's card with the red-button snowflake and thought, What great kids we raised and what a wonderful wife our son, Jon, married.

I knew one day we would have a daughter and today, the "THREE KINGS" reminded us of just how fortunate we truly are -- blessed beyond measure -- to be thought of in such a special way.

So tonight, we'll light a candle, plug in the Christmas tree lights (one more time) and bask in the warmness of our kids' love.

Reply diorkaw
10:11 AM on September 15, 2021
https://buyzithromaxinf.com/ - azithromycin for sale online

Reply jimdofreeQuiep
10:11 AM on September 22, 2021
We spent a lot of time at her home. Maybe so her mother could keep an eye on us. Mrs. Spencer made sure to be around, offering drinks, snacks, chit chat. I noticed that she was fairly young herself. Granted at my age, anyone over 25 was old, but she was probably mid-30s, divorced. If she was a indiction of how Carley would develop, maybe I should wait. Mrs. Spencer had fuller breasts and a nice butt. She appeared to be in great shape for her "advanced" age. I knew she was keeping an eye on me as much as I was on her and her younger daughter. Her eldest, Sharon was away at college at the time. With Mrs. Spencer around we mostly limited ourselves to holding hands and sneaking in a few light kisses. One day Mrs. Spencer caught us by surprise walking in as I'd slid my hand up from Carley's stomach to rub her right breast through her shirt. She didn't really need a bra yet, so I could feel her nipple, hard, through her shirt. Just this much contact had me hard also.