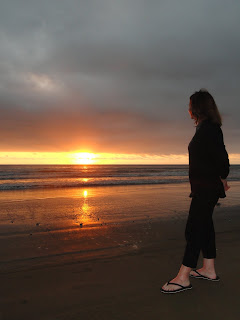 Some folks asked if we actually made it back from the coast because they hadn't heard from us! Well, we're back, but a part of us is still there. I knew I was going to miss "Los Frailes" so much that I made a video of it and uploaded it as soon as I got home. This morning I woke up and said to myself:  "No it wasn't a dream: you had a perfect vacation with amazing weather, great food; you 'swam' with the whales, giggled at the blue-footed boobies, snorkeled in the saphire blue waters of the Pacific and ate coconut ice cream--every night for dinner. And you saw lots of sunsets and clapped when the the 'show' was over!" It's safe to say that I'm going through major coastal withdrawal for which there is no cure except to get back on the bus and travel 7-1/2 hours up the coast to enjoy the pristine beaches of Los Frailes and the magical splendor of Hosteria Mandala. There were absolutely no disappointments on this trip and as the owner of the Hosteria Mandala said to us: "You brought the sun with you!" Normally, during this time of year, it's cloudy and only a handful of sunsets! We were fortunate enough to have three out of four sunset-filled evenings. The lazy days on the beach in my hammock sipping something with an umbrella in it, made me want to pitch a tent and claim my "plot." 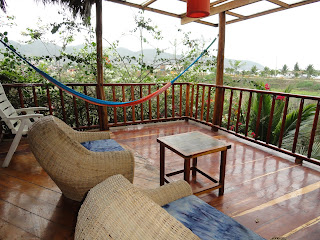 Yes, I got sunburned even after slathering myself with SPF 100 (you have to reapply after you get out of the water). And I did get my share of mosquito bites (even with Off Bug Spray), but it was so worth it. And the boat ride to Isla de la Plata was almost worth the 1-1/2 hour ride of choppy water just to see the dancing whales blow off steam. It was more magnificent than I had imagined to see them rise up out of the water like creatures of the sea and dance on the water before doing a backwards belly flop into the ocean. I had almost forgotten that we weren't actually whale watching, we were on our way to Isla de la Plata to do some hiking and bird watching, but the whales stole the show! The blue-footed boobies and the frigate birds didn't disappoint either and each put on a show of their own. Since both species were mating, they went to extreme measures to strut their stuff. The frigate birds puffed up their red throats to get the attention of the "girls" and they must have been paying attention because we saw lots of little frigates and blue-footed boobies all over the island. 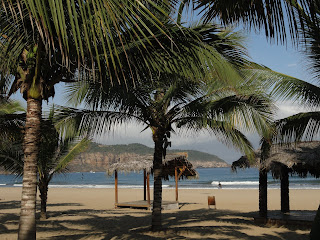 Be forewarned, it's a long day and our group decided they wanted to take the upper trail around the island which was four hours of walking, followed by lunch back on the boat, and snorkeling. If you are prone to sea sickness, be sure to take "Mareol" (dramamine) because you just might lose your breakfast like my shipmate did! Be sure to take it 20 minutes before you get on the boat. There are so many highlights of our trip, but our favorite day had to be at Los Frailes which is a pristine beach with an abundance of seashells which now grace our home. I played in the waves and swam in the gentle surf until my hubby dragged me to shore (kicking and screaming). We then took a hike up to "Mirador" which is not to be missed; you can see the entire Ecuadorian coastline from the lookout which is well worth the 20-minute climb. 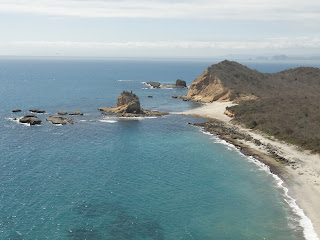 Unlike most expats we took the bus and thoroughly enjoyed the experience: reclining seats, air-conditioning, his and her bathrooms that were immaculate, free snacks, and movies! When did riding a bus get to be so much fun? The Guayaquil bus station is a huge three-story complex with a shopping mall and food courts. My new obsession is "Sweet and Coffee." Watch out Starbucks, you've got some major competition and the price is right! Total cost per person from Cuenca to Guayaquil was $8.00 and our ride up to Puerto Lopez was $3.50.

I'll leave you with some highlights of Los Frailes...(our favorite part of the trip).Create your own video slideshow at animoto.com.